The Auto rickshaws and their drivers have often fascinated me.

Well, fascination isn’t the correct word; they have badgered me, distressed me and at times amused me.

It doesn’t matter whether I’ve been sitting in one, driving alongside one or been on the road side looking at one drive by.

We primarily used Autorickshaws back in our college days. We weren’t allowed to keep our personal vehicles, hiring a cab was way too expensive for our meagre pocket money and buses were too infrequent for our weekly movies.

Hence the Autorickshaw came to rescue.

The auto-rickshaws have an amazing ability to behave like the fastest biker (Fat boy if you please).

If we had 6 minutes to the beginning of the movie, we made sure to tell the auto rickshaw driver (Bhaiya, 10 rupiya extra denge, movie hall 5-minute mein pohcha do) (Make us reach the movie hall in 5 minutes and we shall pay an extra 10 bucks).

Now this guy would start the auto and you could literally see him revving the engine in slow motion,

The turn of the 3-wheeler onto 2 wheels,

The flying hair of the passengers, an occasional drop of a bag.

The squeals of the scared traveler, the dirt flying into the eyes; Yet the Auto-rickshaw driver maintained his calm, and a stern expression in turning the vehicle into the tiniest of lanes, against the fastest traffic and knocking a few carts on the way, whizzing past the cars and just when we used to think we lost our life, the three-wheeler would come to a halt, right in front of the movie theatre and at least 2 minutes to spare before the movie titles started.

Hell! Sometimes we even got to the see the new movie trailers, thanks to the rikshaw guy.

Now, watching from the outside, considering that the 3-wheeler auto rickshaw forms a majority of the local travel in most cities of the country, they do manage to annoy you.

They do not appreciate being over taken by another car or bike or rickshaw.

Sometimes on flyovers and upslopes, the poor vehicle, over burdened by at least 6 people, is moving at a fantastic speed of 10 km/hr; yet if you dare attempt to overtake the same, the driver will move left or right and give the gas pedal a thrust, as if by magic the rickshaw will go faster. 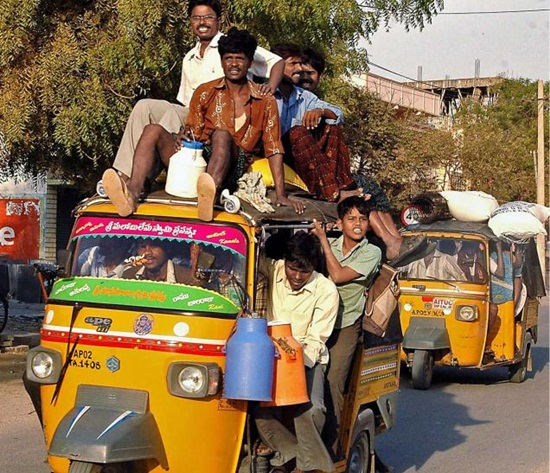 The word exchange on over taking him is another diegesis altogether; none too modest.

Furthermore, if you were to accidently as much as touch the edge of the machine, it wouldn’t stop at just some verbal dispute; one will most likely witness a combat.

To add to the misery, there is a whole lot of “Bhai saab kya hua” crowd!

Its uncanny, how many on-lookers simply stop by to ask “bhai saab kya hua”,

create a congregation, even offer a piece of wisdom and advice, maybe tell an anecdote about their road rage escapade and then move on with “Chalo chaddo, sannu ki” (“Let it be, how does it matter to us”).

In case one is ever waiting to cross one of the busy roads without a traffic light (Or even with one really); beware of the auto-rickshaw.

This guy, with his packed jalopy, is most likely in a rush to get some place not too important, a mere red light on the traffic signal isn’t enough to stop him.

A passer-by, a zebra crossing is just an amalgam of words, virtues of the literate; they have no business in stopping this nimble rickshaw.

So, save your lives, or at least your arms and knees from probable affliction from the metal bends.

Of course, how can we forget the music at this point, it is an autonomous segment in itself.

The choice of music and its volume, both can be subject to judgment.

In case you have forgotten the Bollywood tune of the 80s and 90s, the Auto-rickshaws shall remind you with a cacophony.

The loud speakers with the bass gone off tune a long time ago, the volume turned up to its peak; one would think they wouldn’t need a horn, since you could hear them from quite a stretch. How-ever, the music (If one may call it that) and the horns are two separate entities, that have to be used independently and often inter-dependently.

This pedicab is delivering passengers at the most nominal prices.

The sheer number and dynamism of these rickshaws make them impossible to ignore.

The incessant road rage, the Rajneekanth inspired drive and loud music from Bollywood of the 90s is sure to make you turn your head around.

Sometimes, the wrong side driving and the lack of care for the rest of the crowd does make one want to stop and put some sense in the driver;

But as soon as we stop, someone is sure to come up “bhai saab, kya hua”!

So we prefer to move on “Chaddo, sannu ki”! 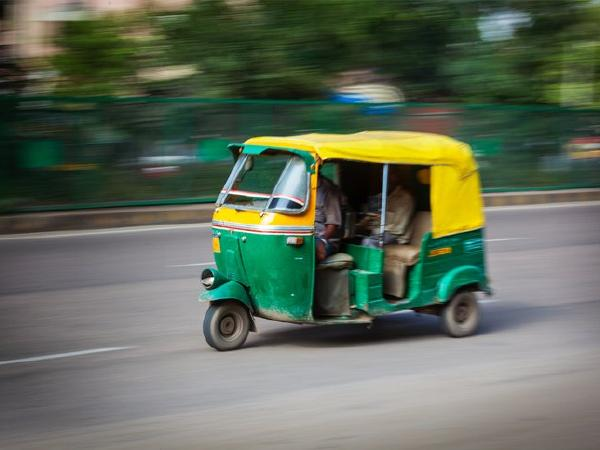